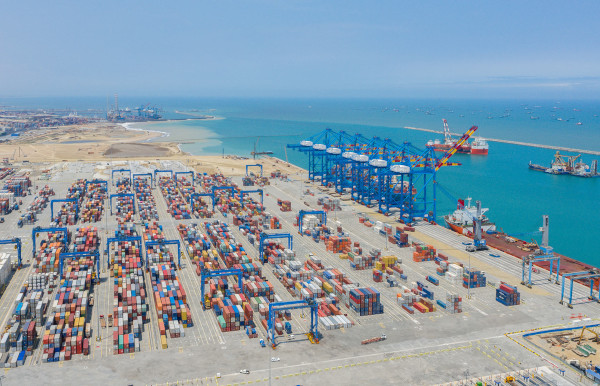 Located on Ghana's Atlantic coast some 18 miles to the east of the nation's capital Accra, the Port of Tema is one of only two deep water seaports in the country (the other being Sekondi-Takoradi), and by the far the busiest, handling 80 per cent of all goods entering and leaving the country.

As the Port is so important to the nation's economy a wide range of goods are imported via Tema, while the principle export is cacoa. The Port is managed by the Ghana Ports and Harbours Authority, which is part of the Ghana Maritime Agency.

It was the ruling British colonial authorities who first suggested constructing a port on the site of a small fishing village called Torman in the early 1950s, but construction didn't actually begin until after Ghana gained independence from Britain in 1957. The Port opened for business in 1962, and the town of Tema – which has a population of around 160,000 – sprang up around it. For this reason Tema is also known, colloquially, as "Harbour Town".

There is also a second, separate fishing port situated close by, which is used both by large-scale industrial fishing trawlers, and by traditional Ghanaian fishermen in canoes, each having their own area of the port.

During the 2010s, the Port benefited from a $115 million refurbishment and modernisation programme, in a bid to ensure its continued prosperty into the 21st Century.

The Port covers an area of 3.9 square kilometres on land, while the enclosed waters of the harbour area cover some 1.7 square kilometres. The Port has 12 deepwater berths and one berth for oil tankers. Pilotage is compulsory for all ships entering and leaving the harbour, and tugs are available.

Draft in the channel and at the oil terminal is 10m; this is also the maximum anchorage available, while draft at the cargo pier is just 7.6m. As such, the Port may not be suitable for the very largest ocean-going ships, but thanks to the improvements carried out in the last decade it's otherwise well equipped: fixed and mobile cranes with a capacity of up to 100 tonnes are available, as are a full range of chandlery, provisioning, longshore and repair services, including a medium-sized dry dock.

• During the colonial era, Ghana was known as the Gold Coast.
• Tema sits right on the Greenwich Meridian, and the city is twinned with Greenwich itself.
• The Port was designed by Theodore S Clerk, the first Ghanaian ever to qualify as an architect. Sadly, he died of stomach cancer just three years after the Port opened.

We offer Roll on Roll off and Container Car Shipping to Tema, Ghana. For a tailored estimate for your shipment, complete the quick quote form on this page.