Information on the Port of Shuwaikh, History & Facilities

Regular shipments by RoRo and Container direct to the Port of Shuwaikh, Kuwait 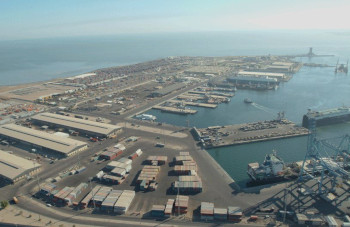 The most important port in Kuwait, Port of Shuwaikh lies on Kuwait Bay in the Persian Gulf, just to the west of Kuwait City itself.

Kuwait was a small fishing village when an Arab tribe called the Bani Utbah arrived in 1713. The remainder of the 18th Century saw the town growing stature as a centre of trade between the Arab nations, China and India, while the arrival of displaced Iraqi craftsmen during the 1775-79 Siege of Basra led to the emergence of a boat-building industry in the region.

During the 19th Century, ships built in Kuwait were renowned for their reliability, and Kuwaiti sailors were regarded as some of the world's best. Like many countries in the Gulf, Kuwait's other key industries at this point were pearling and fishing, while its location on the trade routes between Europe and the Far East meant that international trade has also long been important to the country's economy.

By the early 20th Century, Kuwait was known as "the Marseilles of the Gulf" and the economy was booming. The country suffered a major economic downturn in the 1930s, due to the collapse of the pearling industry and the Great Depression, but things changed again when oil was discovered in 1938. Crude oil exports began in 1946 and ushered in a period of great prosperity that lasted from the 1950s until the early 1980s.

The Port of Shuwaikh is fairly shallow compared to many international ports: draft in the channel is just 7.5m at low tide and 9.5m at high tide, while draft at the various berths – of which there are 21, with a total quay/pier length of just over 4km – ranges from 6.7m to 10m. For this reason, pilotage is compulsory for all vessels, with tugs on hand to assist if required.

There are dedicated berths for grain, cement, foodstuffs and livestock, as well as three (berths 10, 12 and 13) that are reserved for container ships. The former are equipped with specialist equipment such a grain elevator, refrigerated storage and a 2.6-hectare cattle pen, while each of the container piers is equipped with two 65-ton gantry cranes, nine reach stackers and four empty container handlers.

The Port has 16 warehouses totalling 17 hectares, as well as just under 49 hectares of outdoor storage. It is also home to electric power and water desalination plants that serve the whole of Kuwait City and the surrounding area.

• Like other Gulf states, Kuwait has a high immigrant population, with just 1.3 million of its 4.5 million population born in the country.

We offer Roll on Roll off and Container Car Shipping to Shuwaikh, Kuwait. For a tailored estimate for your shipment, complete the quick quote form on this page.