Car Shipping to the Port of Santos, Brazil

Find out about the history of Santos port. 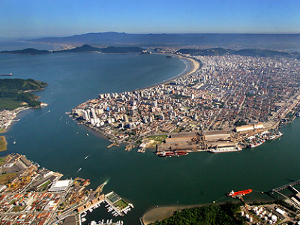 Santos is the main city in the metropolitan region of Baixada Santista. The city is split into both urban and rural areas. The landscape of the port is adorned with canals over a hundred years old.

A Portuguese nobleman named Bras Cubas founded the city of Santos in 1546. The location was picked because it was a convenient resting point for people crossing the Serra do Mar mountain range. The first railway linking the port to the state capital was completed in 1864.

In the 19th century, the Port of Santos was known as the "port of death" because of outbreaks of Yellow Fever. Ships would often avoid docking at what was then a wooden plan port. The entire area was prone to illness because of the floods that often wreaked havoc in the city, exacerbating the spread of disease.

In the early 20th century, a major overhaul was carried out to create the port's modern structure, which can still be seen today. This eliminated the risk of diseases, as well as provided the port with a new industrial-age infrastructure. The current structure is considered Brazil's most modern.

The port includes 36 warehouses, cranes, airports, and medical facilities located either at the port or just off the port.
Facilities include:

The bubonic plague once nearly wiped out the entire town in the 19th century.

Santos is home to the largest beachfront garden in the world, which measures 5335 metres in length.

Santos has a tropical rainforest climate in which there is no real dry season. All months of the year average more than 60mm of rainfall during the entire course of any given year.

The port handles a very large portion of the world's coffee exports which accounts for much of its wealth.

We offer Roll on Roll off and Container Car Shipping services direct to Brazil.
.