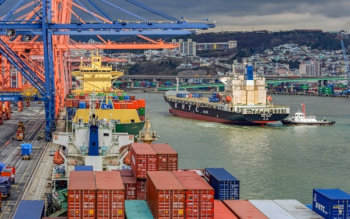 Located at the mouth of the Ansong River, where it flows into the Asan Bay in the Yellow Sea some 64km south of the nation's capital Seoul, Pyongtaek isn't just home to one of South Korea's busiest ports – it also houses a large Korean naval base, as well as substantial numbers of US troops.

The Port hasn't published official cargo statistics since 2013, but in that year it handled just just under 110 million tonnes of cargo in total, including nearly 520,000 TEUs' worth of containerised goods and 1.5 million automobiles. Some 11,700 ocean-going vessels visited the port in the same time period.

The Port is state-owned, and operated by the Pyeongtaek Regional Office of the Ministry of Oceans and Fisheries.

Given its rivermouth location and proximity to Seoul, it's unsurprising that Pyeongtaek (or Yeondalbugok, or Busanhyeon, as it's also been known over the centuries) has featured a harbour/port of some kind since at least as far back as 100 BC, according to written records.

Since then further berths have been added to accommodate ever larger vessels, while in 2009 the Port's hinterland was designated a free trade zone, since when transshipment traffic has doubled.

Pilotage is compulsory for all foreign vessels in excess of 500 DWT.

• During the Korean War, the Battle of Pyeongtaek on 6 July 1950 was an important early victory for North Korean forces.

We offer Roll on Roll off and Container Car Shipping to Masan, South Korea. For a tailored estimate for your shipment, complete the quick quote form on this page.