Regular shipments by RoRo and Container direct to the Port of Misurata, Libya 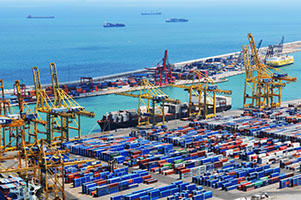 Misurata (sometimes spelt Misrata) is the third-largest city in Libya, and its most important business and commercial hub. It's home to two ports, both of which are located in the Qasr Ahmad district, some 15km from the city centre: the Port of Misurata itself, which is the country's busiest port, plus the Port of Libyan Iron & Steel Company.

The latter is owned by the Libyan Iron & Steel Company, and used exclusively by them; AutoShippers uses the Port of Misurata, which is owned by the government's Socialist Ports Company, and operated by the Qasr Ahmad Port Authority. The Port and the immediate surrounding area have been a Free Trade zone since 2000.

Today, the Port of Misurata is owned and operated by Libya’s state rail company, TCDD, and handles in excess of 12 million tonnes of cargo each year.

There has been a settlement at Misurata since at least 1000BC, but the modern city began to emerge during the 7th Century, at which time Libya was part of the Umayyad Caliphate. During the Middle Ages, the town was an important stopping-off point for caravans crossing the Sahara Desert. During this era, however, the country's most important port was Benghazi.

Libya was part of the Italian empire from 1911-1947, during which time the city was modernised and much better road links to Benghazi and Tripoli established. But the town only really rose to prominence during the 1970s, as Muammar Gadafi embarked on a modernisation programme that saw iron and steel mills built at Misurata, and the city's population expanding rapidly as rural Libyans relocated to the city in search of employment.

The Port of Misurata is quite small by international standards, and has only a limited number of berths, but can still welcome the largest of ocean-going vessels. Draft is 12.2m in the channel and at the cargo piers, but anchorages of up to 23m are available. Pilotage is compulsory for all arriving vessels, with tugs on hand to assist if required.

The Port of Misurata can provide a full range of provisioning and chandlery services, although there is only a small dry dock, and ship repair facilities are limited. Fixed and floating cranes are available, with capacities of up to 100 tonnes.

• Apart from the iron and steel industry, other key contributors to the local economy are the cloth and textile industries and the Al-Naseem Dairy, which employs over 750 people in the town.
• Established in 1983, Misurata University is now widely regarded as Libya's most important university.

We offer Roll on Roll off and Container Car Shipping to Misurata, Libya. For a tailored estimate for your shipment, complete the quick quote form on this page.