Auckland is the main car shipping port for cars, trucks, autos and moving cargo imported into New Zealand. At Autoshippers UK we arrange car shipping to Auckland New Zealand direct from all major UK ports and specialise in shipping cars by container and RoRo (Roll on Roll off) 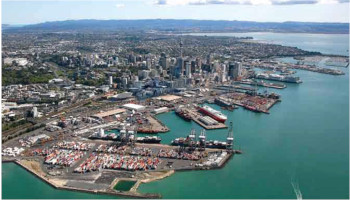 The Port of Auckland is a container and international trade port on the Waitemata Harbour, lying on the central and eastern Auckland waterfront (north of the central city of Auckland). It is also the main Ro Ro port for the cars.
Many of the wharves handle Roll-on Roll-off (Ro-Ro) vessels importing cars and other vehicles. A Vehicle Entry User System (VENUS) helps customers track the flow of cars from the ship to the showroom floor.

Auckland Harbour Board was established by Auckland Provincial Council in 1871. The Council established a wharf, a quay and a breakwater. The Port has been the largest in New Zealand since 1924.

Land reclamation has enabled the building of further wharves, railway dockyard and a passenger terminal. Following the Second World War, Fergusson Wharf was established, providing facilities for the container trade. Auckland is now the largest container port in Australasia.

Stevedoring services are provided by private organisations, with cargo-handling equipment leased from Ports of Auckland. There are 8 cargo-handling units with fork hoists, a reach stacker and top-lift gantry trucks. There are more than 40 straddle carriers, able to lift 2 20-foot containers simultaneously. Eighty per cent of the straddle carriers are low-emission, low-noise diesel models able to maintain refrigeration.

Inter-wharf transfer facilities are provided for the increasing number of shipping customers who use Auckland Port for trans-shipment.

We offer a service for car shipping to New Zealand.