Regular shipments by RoRo and Container direct to the Port of Aqaba, Jordon 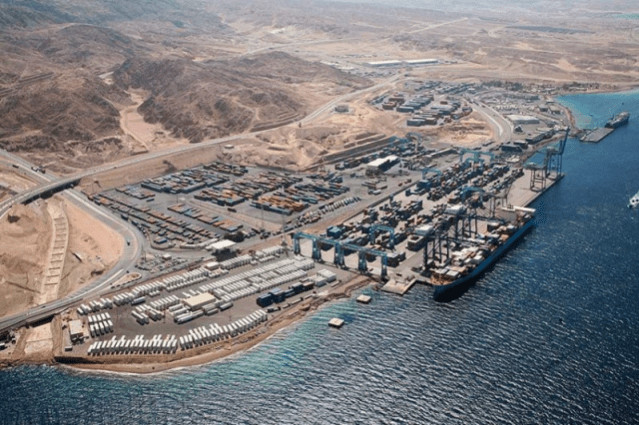 Located at the very north-eastern tip of the Red Sea on the Gulf of Aqaba, Aqaba is Jordan’s only port. It welcomes over 3000 ships annually, of which just under half are cargo vessels, with annual cargo volumes at the Port ranging from 15-20 million tonnes. The rest are passenger ships, carrying over a million passengers each year.

The Port of Aqaba is one of the most modern and technologically advanced container ports in the region and this, combined with Jordan’s comparative socio-political stability compared to its neighbours, means that as well as handling 78 per cent of Jordan’s exports and 65 per cent of its imports, the Port is also vital to the economy of the region as a whole.

The Port is owned and managed by the Aqaba Development Corporation, though its 12 terminals are operated by five different private companies.

There has been a human settlement at Aqaba since at least 4000BC, and its first port was built by the Edomites in 1500BC. The city was already an important centre for trade in the region by the time the Ancient Greeks arrived in 300BC.

During the 12th Century the town was all but destroyed during the Crusades, and for several centuries it was little more than a fishing village, but it was rebuilt in the late 1800s and began to rise in importance once more.

The modern Port dates back to the establishment of the Aqaba Port Authority in 1956, since when the Port has been growing steadily in size and status, with new quays, berths, terminals, cargo-handling equipment and/or storage areas being added periodically.

Today, the Port of Aqaba consists of three areas: the Main, Containers and Industrial Port Zones.

The 12-berth Main Port Zone (MPZ) has over 2km of quays and handles dry and liquid bulk goods, Ro-Ro shipping and general cargoes. The Containers Port Zone, 5km to the south, has just over 1km of quays offering berths for seven ships, while the Industrial Port Zone lies 18km south of the MPZ and offers multiple berths for vessels transports bulk goods such as grain, rice, phosphates and cement.

Pilotage is mandatory for vessels over 50 tonnes and there seven tugs available to assist with berthing. Draft at the different cargo quays ranges from 9.4m to 15m, and a full range of chandlery and provisioning services are available at the Port, although ship repair facilities are limited.

• Aqaba has been known by several different names over the past 6,000 years, including Elath, Berenice, Aela, Haila and Ayla. It acquired the name Aqaba during the 12th Century.
• The town is mentioned in the Bible, in Kings 9:26: "King Solomon also built ships in Ezion-Geber, which is near Eloth in Edom, on the shores of the Red Sea.”

We offer Roll on Roll off and Container Car Shipping to Aqaba, Jordon. For a tailored estimate for your shipment, complete the quick quote form on this page.