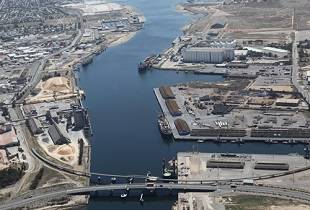 The Port of Adelaide (Australia)

Port Adelaide was first explored by Col. William Light, first Surveyor-General of South Australia in 1836, who went on to choose the location and layout of the city of Adelaide. He had intended to link the city to the port by way of a canal, but investment was never found as the distance was a great inconvenience. Having previously been mangrove swamps, the port suffered from a lack of fresh water and quantities of mosquitoes. As a result the port acquired the soubriquet "Port Misery" by 1840.

A tender was awarded by the Governor to the South Australian Company to construct a wharf, warehouse and roadway, and it was completed in 1840 on reclaimed land, which accommodated vessels up to 539 tons.

Ambitious plans exist for the redevelopment of the Port Adelaide site, which had declined with the development of shopping malls and other retail opportunities. Under the guidance of a Port Renewal Steering Committee, the plan is to encourage more people to work and live and invest in the area.

The Port of Adelaide comprises of over 20 wharves, a container terminal and an inner and outer harbour. The inner harbour is 11km upstream from the outer harbour on the Port River.

We offer a car shipping to Australia service.