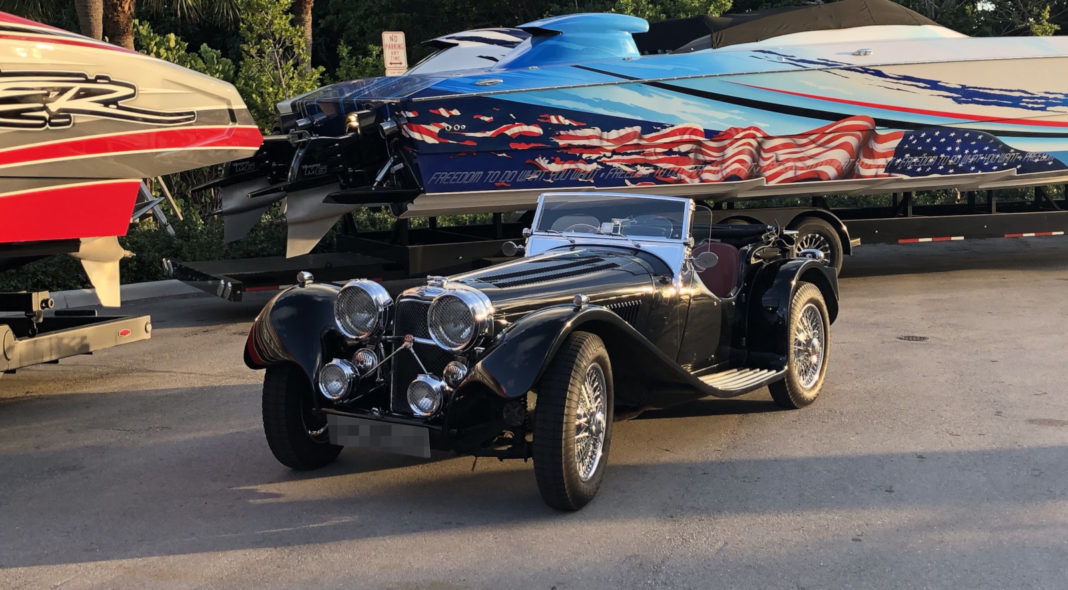 Produced from 1936-1941, the SS Jaguar 100 is one of the few classic cars where genuine originals are outnumbered by reproductions – some of which can, themselves, command six-figure sums. But with only 314 cars produced during the car’s original run, perhaps it shouldn’t be surprising that so many people are content just to own a reproduction – just look at the thing!

These days, the words “Jaguar” and “sidecar” are at pretty much opposite ends of the motoring glamour spectrum. But mighty oaks from tiny acorns grow, and similarly, Jaguar Cars Ltd has its roots in the Swallow Sidecar Company, set up in Blackpool in 1922 by Bill Lyons and William Walmsley.

Swallow soon moved on from building motorcycle sidecars to building bespoke car bodies onto Morris frames. The Austin Seven Swallow really put the company on the map in 1927, but by the time the 30s dawned the company had begun building its own vehicles, and became known as SS Cars. SS Cars built a series of successful saloons, tourers and coupés during the 30s before launching the SS Jaguar 2.5L saloon and SS Jaguar 100 sports car in 1935.

The SS Jaguar 100 had a similar body shape to SS Cars’ previous, less successful SS 90 sports car, but with a new chassis and engine. The ‘100’ in its name referred to its touted top speed, and the car, which retailed at time of launch for £395, was an instant success – both in sales terms, and on the track. Motoring journalist Tom Wilson and his wife won the 1936 International Alpine Trials in an SS 100, while the following year’s RAC Rally saw a factory team of three SS 100s beaten to first place by a privately owned model!

In 1937 engine size was increased to 3.5L, and the previous wood-and-metal body was replaced by an all-steel design. But the war years saw SS Cars’ factories given over to munitions manufacture, and production of the car ceased in 1941, by which time just 198 2.5L and 116 3.5L cars had been built.

In the post-war years, SS Cars would change its name to Jaguar Cars (to avoid the Nazi connotations of the SS initials) and go on, of course, to produce more classic vehicles than you could wave a pair of string-backed driving gloves at. And the SS 100’s story wasn’t over, either. Various manufacturers (and individual enthusiasts) have built faithful, high-spec SS 100 reproductions since the 1960s, but four companies in particular have made this market their own.

The Birchfield Motor Company turned out 20 or so cars from the mid-60s to 2004, while a further 28 or so Steadman TS100’s were built by Steadman Motor Company in the 80s and 90s. Australia’s Finch Motor Company still makes SS 100 replicas today (along with repro Ferrari Testarossas), but the clear market leaders are Suffolk Sportscars, who started making repro SS 100’s in 1990 and in 2017 proudly announced that they had now built 315 of them – exceeding the production total achieved by the original car. Which is where we came in…

The SS Jaguar 100 may have only been produced in small numbers, but it’s fair to assume their owners must generally have looked after them rather well, because they’re not as hard to track down as you might think. At time of writing, we could find eight being offered for sale online: the catch, of course, is the price!

Most of those eight were listed as “price available on request” but of those that did list a price, the most expensive was an eye-watering £750,000 while the cheapest was a “mere” £145,750. Which is where those reproductions come in: the most expensive of these can set you back in the £130K range but £85K-£100K would be a more usual figure.

We shipped an SS Jaguar 100 reproduction to the States back in 2018 and received some great arrival photos from the customer, shown below.