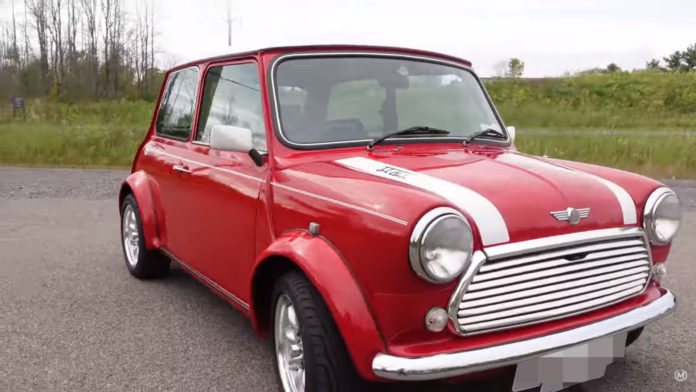 Nick Tubbs (The Mini Vlog over on YouTube) is a Miniac, he is seriously passionate about Minis and everything Mini related. So when Nick wanted to import a Mini into the USA from the UK he enlisted the help of Autoshippers for the shipping process and we were happy to help.

Although already the owner of 2 Minis, a GP3 (number 1 of 3,000 – for more details on this see “How I won the MINI GP3 #001”) and an R60 Countryman, Nick was always on the lookout for another car. He was also always curious about importing a car from another country, but was worried about how difficult it seemed, with potential hidden fees, complicated tasks and lots of paperwork. But he decided to take the plunge and buy a car from the UK and arrange the import himself.

And I bet you can guess what type of car Nick set his sights on….

Even though the Mini marque was founded in 1969 by British Leyland, the company had been using the Mini name in car models since 1959. Originally intended to be an affordable car during the Suez Crisis, which sent fuel prices soaring, the Mk1, or Morris Mini-Minor as it was known, was designed to be a small car that maximised passenger space.

To achieve the passenger space that was wanted, the engine was turned sideways, in the front of the car and the wheels were positioned further into the corner than previous small car models. The way that the 848cc engine was positioned put weight over the front tyres which, as well as the space allocation, meant that the Morris Mini-Minor had excellent traction and grip.

The two-door saloon version was joined by a three-door estate in 1960, and further models followed including a two-door van, two-door pick-up and convertible coupe. Although sales began slowly, the Mini became a big hit in the 60’s, with a total of 1,190,000 MK1’s being produced. Despite this, it is rumoured that the MK1 wasn’t profitable for The British Motor Corporation (BMC), but it became the iconic British car for the 1960’s nonetheless.

Perhaps the most famous incarnation of Mini is the sport-tuned film-star that is the Mini Cooper. In 1961, British rally car racer John Cooper and his Cooper Car Company saw the potential in the Mini and set their minds to turning it into a racing legend. John was a designer and builder of successful Formula One cars and contacted the BMC management to gain permission to create the Mini Cooper.

The engine capacity was increased to 997cc which meant an increase in power from 34 to 55bhp. The Mini Cooper was given a race-tuned engine and front disc brakes, as well as an improved gearbox. In 1963 the Mini Cooper “S” was introduced, with versions having 970cc and 1,275cc engines, and the production of the 1,275cc continued until 1971.

The Mini Cooper won the 1964, 1965 and 1967 Monte Carlo Rally as well as numerous British, European and International car championship titles. Mini Coopers were famously used in the film The Italian Job in 1969 further sealing the deal and ensuring that it would remain the most iconic of British cars.

In 1994, Mini’s owners, then known as the Rover Group, were acquired by German luxury car manufacturer BMW. The production of what was going to become known as the “Classic Mini” continued until 4th October 2000 when number 5,387,862 became the last Mini manufactured.

BMW kept ownership of the “Mini” name and introduced the MINI Hatch (the MINI in capitals) in 2000 which was similar in style but technically unrelated to its predecessor. Most notably the MINI doesn’t have the affordability of the Classic Mini, and is much more in line with the BMW luxury car specification.

Helping a Mini Enthusiast to Import a Car into The US

Back to Nick, and his dream of buying and importing a Mini from the UK. He had scoured the internet, mainly using classic car auction sites such as Cars & Classics to find suitable cars to add to his collection. With the help of this website, his friend Peter, and some early morning video calls, he found a classic Mini that was unmodified and more than 25 years old, meaning he could import and register it for use on the roads in the USA.

For more details on the 25-year rule take a look at our blog, Everything You Need to Know About The 25-Year Rule or our US Import Guide.

It was then that Nick contacted us at Autoshippers who are, in his own words “one of the greatest companies I’ve ever worked with”. High praise indeed! What Nick liked about Autoshippers is that we are experts at car shipping, knowledgeable about cars and more importantly, approachable when it comes to answering any questions that he had concerning not only the car shipping process but the Customs procedures, vehicle registration and everything in between.

Here’s a quick snippet from the video highlighting his experience with the team here at Autoshippers (a big thanks for the praise, Nick!!)

Ro/Ro Car Shipping to The USA

At Autoshippers we have a number of different options for shipping your car to the USA. They have different costs, transit times and origin and destination ports so we can offer you the best solution for your own specific needs.

For Nick’s new Classic Mini, we booked on a Ro/Ro service. This option is a specialised vehicle-carrying sea freight service, using specially made Ro/Ro shipping vessels. Your car is driven on at the port of departure, and driven off at the port of destination, hence the name Ro/Ro (Roll-on, Roll-off). This means that there is no long wait at either end to either load or unload a shipping container, and your vehicle is not held up waiting for Customs clearance of any other vehicle.

Car manufacturers, including BMW, use this service for shipping new cars, as well as being used by our customers for their own personal cars.

Although Autoshippers’ part of this process was finished, when Nick came up with an issue regarding the importing and registration of his Classic Mini in the USA, he again gave us a call and we were happy to help.

With the assistance of our US Broker, Pride Baltimore, we were able to make sure that the correct paperwork was in place and Nick was able to clear Customs and collect his car from the port, as well as arrange the registration for use on US roads.

This links us nicely to The Mini Vlog YouTube channel, where you can watch Nick take you through the whole process, including a few cameo’s from some of the team here at Autoshippers (if you listen carefully) where he will give you the rundown on his experiences of when he imported his Classic Mini into The USA.

Our thanks go out to Nick for booking through us, and we hope that he has many miles of happy driving with this Classic Mini.

If you’d like more details of the services that we can offer for car shipping to the USA and other destinations over the world, please visit the Autoshippers website. If you have a specific enquiry then please give us a call on 0800 389 0784 / +44 117 982 8123 or fill out our contact form and we’ll be happy to help.

Alternatively, if you need a price then please click on the “Get a FREE car shipping quote!” tab on this page and our team will reply with a free, no-obligation quotation.