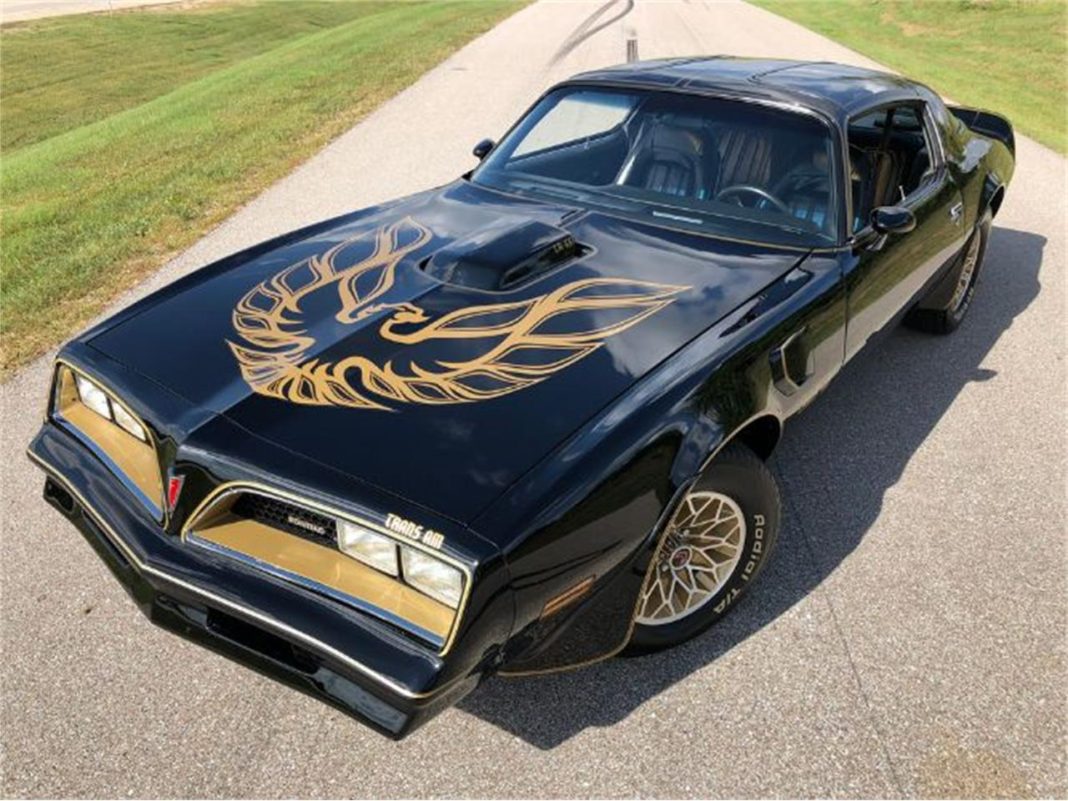 Many of the rare and collectable cars we ship can safely be described as “an iconic vehicle”. That’s not necessarily true of the Pontiac Firebird, though: this US pony car was in production for so long, and available in so many different generations and variants, that it would be safer to describe it as several iconic vehicles!

Fancy driving around in your very own version of K.I.T.T from *Knight Rider*? Then you’ll be wanting a third-generation Trans Am model. Alternatively, if you’ve got a hankering to do some interstate booze smuggling à la Burt Reynolds in *Smokey & The Bandit*, or doing some private detecting like Jim Rockford, then you’ll be after a second-generation Firebird. And so it goes on.

Like another car that’s previously featured in this series, the Chevrolet Camaro, the Firebird was Pontiac’s answer to the Ford Mustang, and its entry into the burgeoning “pony car” sector. The similarities don’t end there: Pontiac and Chevrolet are both part of the General Motors group, so not only were both cars first issued in 1967 (on 23 February, in the case of the Firebird), they originally shared the same chassis.

The Firebird was in production from 1967 to 2002, during which time the car went through four generations. The first generation was produced from 1967 to 1969 and, as stated above, drew heavily on the Mustang for inspiration, with the same “coke-bottle” frame as the Camaro but with a more streamlined front end. It was initially offered with a 3.8L six-cylinder engine providing 165bhp, but three 5.3L and 6.6L V8 versions providing 250-325bhp were also available and proved more popular with customers.

1969 saw the arrival of the first Trans Am model. The “Trans Am performance and appearance package” was a set of optional upgrades, including improvements to the handling, suspension and horsepower, as well as exclusive body features. Trans Am variants would continue to be offered throughout the Firebird’s lifetime. There were also Sprite, Esprit and Formula versions at different times: think of these as a step up from the base car but a step down from the Trans Am.

Rising oil prices also led to the arrival in 1982 of the third-generation Firebird, which was more aerodynamic and fuel-efficient. Out went the smooth curves of the earlier models and in came angular, sharp-edged 1980s styling, a hatchback design with a rear spoiler and pop-up headlights. This basic design went essentially unchanged for the rest of the decade. A more Ferrari-like “notchback” version was also available, with a shorter, steeper rear window, but only 700 of these were ever produced (making such models highly collectable today).

The fourth-generation model (1993-2002) was a more streamlined take on the third-gen design and offered with a 3.4L engine in the base model or a 5.7L engine in the Trans Am versions. Production finally ceased in 2002 – though in March 2017 an ultra-limited GM Bandit Edition Trans Am went on sale, limited to just 77 cars to reflect the film’s year of release.

And that’s just a rough overview! Naturally, during those 35 years, there were constant minor tweaks to the engine, transmission, carburettor and so on, while new technologies like powered windows and mirrors, ABS braking, airbags, traction control, system diagnostics and so on were added as they became available. On top of that, there were also various special and anniversary editions. Luckily for the true petrolhead, a full breakdown of all the many different variants can be found on Wikipedia.

This is where we usually give you a rough guide as to what you might expect to pay for the car in question. In the case of the Pontiac Firebird, though, that’s very hard to do: because the car was in production for 35 years, and underwent so many changes, prices vary immensely even before you take the usual mileage and condition factors into account.

Generally speaking it’s Trans Am  rather than base models that are the most collectable: a 1969 Trans Am convertible in top condition would set you back a whopping $1.1M, while the most expensive non-Trans Am car – a 1973/74 Formula model with a Super Duty 455 engine, of which only 101 were ever produced – would be a comparative snip at around £120,000.

Meanwhile back on planet Earth, Classic Trader had 18 Firebirds on sale at the time of writing, mostly in the £15K-£40K range. A search on US sites is more likely to prove fruitful – there were over 600 for sale when we looked at Autotrader.com, though obviously if you’re reading this in the UK you’d then need to get it shipped here.

For us, it’s the late 60s/early 70s convertibles that are the most drool-worthy, but others may prefer the quintessentially 80s styling of the third-gen cars. That’s a decision you’ll have to make for yourself, but if we’ve whetted your appetite and you want to know more, this book by David Newhardt should tell you all you need to know. Happy (general) motoring!

Below are a few Firebird’s we’ve had the pleasure of shipping.

We hope you enjoyed our Closer Look at the Pontiac Firebird! Keep an eye out for more on our blog or check out the rest of our interesting shipments series. And of course, if you’re shipping a car (whether it be a classic or family car) get in touch today or get a quick quote here.