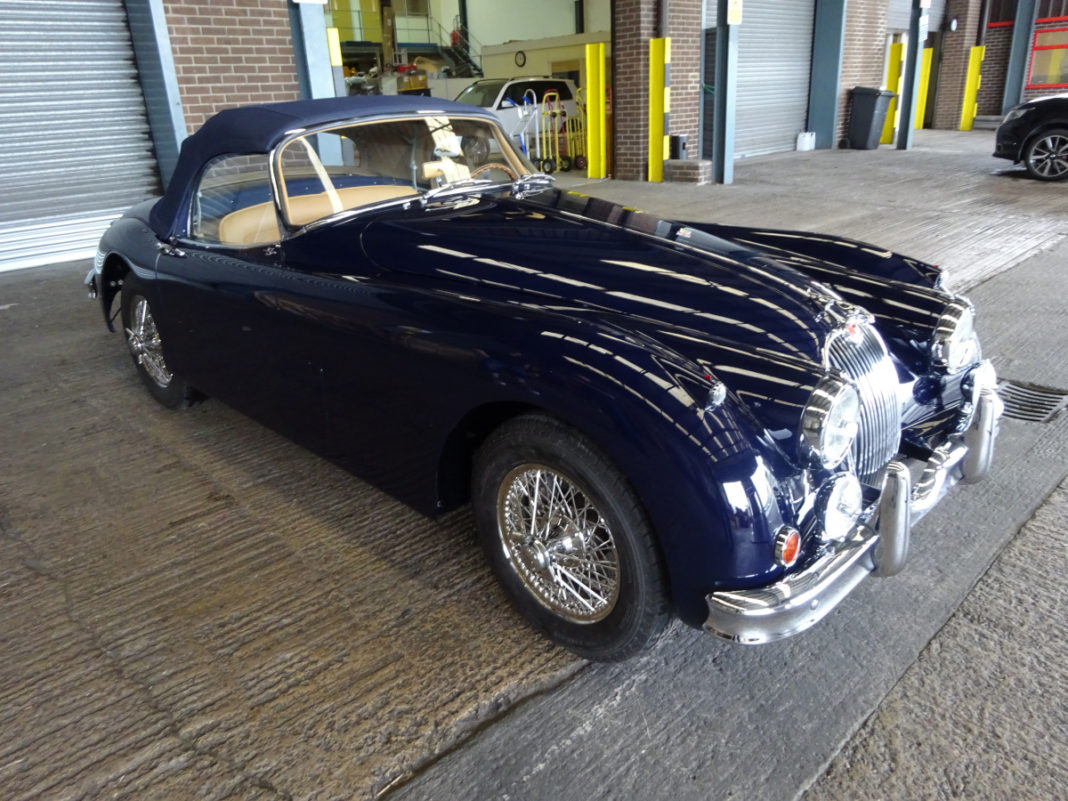 Cars come in all shapes and sizes. Some cars are big and muscular, some are sleek and sporty, some are sophisticated and stylish. And then there’s the Jaguar XK150, a late 50s sports car that managed to combine all of the above into one highly collectable package…

Jaguar began life as the Swallow Sidecar Company in 1922. As the company progressed from making sidecars, to making car bodies, to making full vehicles, the company’s name changed first to SS Cars, then in 1945 to Jaguar Cars.

The first sports car produced by Jaguar Cars (although several previous SS cars had ‘Jaguar’ in the model name) was the XK120, which was launched as an open two-seater roadster at the London Motor Show in 1948, and which at launch was the fastest production car in the world, boasting a top speed of 120mph (193km/h).

Fixed-head and drophead coupé models were added to the range in 1951 and 1953 respectively, before the XK120 was replaced in 1954 by the XK140, which had more interior space, better brakes, bigger bumpers and, from 1956 onwards, optional automatic transmission. Again, roadster, fixed-head coupé and drophead coupé variants were available – and again the car was phased out after just a few years, to be replaced in May 1957 by the XK150.

The new car had a one-piece windscreen (compared to its predecessors’ split-screens), a wider bonnet (hood, if you’re reading this in the US), and a leather-trimmed dashboard. It was powered initially by a 3.4L straight-six engine, though in 1960 this was increased to a 3.8L engine. You can see how the car was initally received in this very in-depth 1958 review by MotorSport Magazine.

Over the car’s 3.5 years in production, improvements to the carburettor slowly boosted its power output from 190 bhp to 210, 250 and eventually 265 bhp. SE (‘special equipment’) and S variants were also available, the former having a slightly tweaked engine while the S model featured a triple- rather than double-headed SU carburettor.

The 3.4L car had a top speed of 132mph (212km/h) and could accelerate from 0-60mph (0-97km/h) in 7.8 seconds – figures which were impressive enough for the XK150 to hang onto its “fastest production car” status for a few more years. But like its predecessors, the XK150 had a fairly short production life, largely because it was fast being outclassed by rivals such as the Mercedes 300SL and Austin Healey 3000. The last car rolled off the production line in October 1960, by which time Jaguar had sold 4,445 fixed-head coupés, 2,672 drophead coupés and 2,265 roadsters.

Jaguar would have greater success with its next sports car, the E-Type (or Jaguar XK-E, as it was known in America), shifting some 70,000 in the years 1961 to 1975. But of course, the comparative rarity of the XK150 is part of the reason it’s so sought-after today…

All Jaguar XK cars are very collectable today, with roadsters the most highly sought-after, followed by drophead and then fixed-head coupés – their prices reflecting the respective cars’ rarity.  The most collectable of all is the XK150S roadster – partly because for this model Jaguar jettisoned the two (fairly token) rear seats, thereby creating considerably more leg room for the driver.

At time of writing, one such car was being offered online for the eye-watering sum of £349,995 – but before you have a heart attack, rest assured more affordable XK150’s are available! The cheapest we could find online was going for £49,251, although that was a part-restoration job: generally speaking, expect to pay anywhere from £80K-£120K, up to around £150K depending on mileage, condition and model.

It’s worth noting that E-Types from the 1960s can be had for considerably less, so for the first-time Jaguar buyer that might be a more sensible place to look. But as desirable as an E-Type might be, owning one just won’t give you the same bragging rights as owning an XK150.

Our team had the pleasure of shipping the XK150 featured in the top image of this article, and we even made a quick video of the process that you can view here.

We hope you enjoyed our Closer Look at the Jaguar XK150! Keep an eye out for more on our blog or check out the rest of our interesting shipments series. And of course, if you’re shipping a car (whether it be a classic or family car) get in touch today or get a quick quote here.