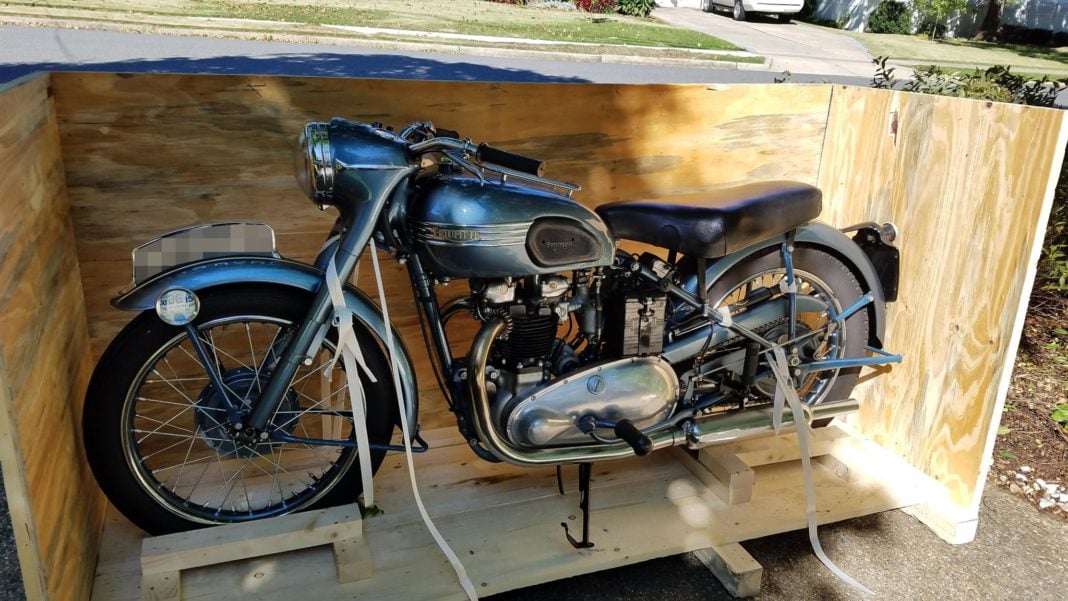 A little piece of British two-wheeled motoring history recently passed through our hands here at Autoshippers, as we helped transport a 1951 Triumph Thunderbird motorbike from its former home in the UK to that of its owner’s niece in Washington state, USA.

It’s a fitting resting place for the bike, given that the Thunderbird was an attempt by Triumph to capture the US market in the first place! Launched in 1949, the Thunderbird was essentially a reworking of the existing Triumph Twin, which had been a great success domestically since launching in 1937, but with the 500cc engine bored out to 650cc to provide the extra power America’s wide-open spaces demand.

A launch event for the bike saw three riders complete 500 miles of circuits on the bike at an average speed of 90mph, kickstarting the bike’s reputation as the choice for speed demons. Sales certainly weren’t hurt any when Marlon Brando rode one in ‘The Wild Ones’ in 1950, either – although at the time, Triumph representatives officially complained to the film’s makers that it would damage the company’s reputation.

That original ‘6T’ Thunderbird was produced, with various minor tweaks, right through till the mid-60s. Since then several other Triumph motorbikes have born the Thunderbird name, the TR65 Thunderbird in the early 80s, the Thunderbird 900 in the mid-90s and, since 2008, the new Triumph Thunderbird, a 1600cc cruiser with an eight-valve parallel-twin engine.

It’s the original that holds a place in motorcyclists’ heart, though. The owner of the particular model we shipped is a former engineer who used to race motorbikes in the 1940s and 50s. Since his retirement, he’s made a hobby of buying, repairing and restoring vintage motorcycles of that era – but now, at the age of 91 and with three other restoration projects still ongoing, he’s decided it’s time to pass this particular bike on to the next generation of the family. And naturally, we were happy to help him do just that!

If you’re shipping a motorbike or a car, whether it be a classic car or your family car, get in touch with Autoshippers today or complete our quick, no-obligation quote here.