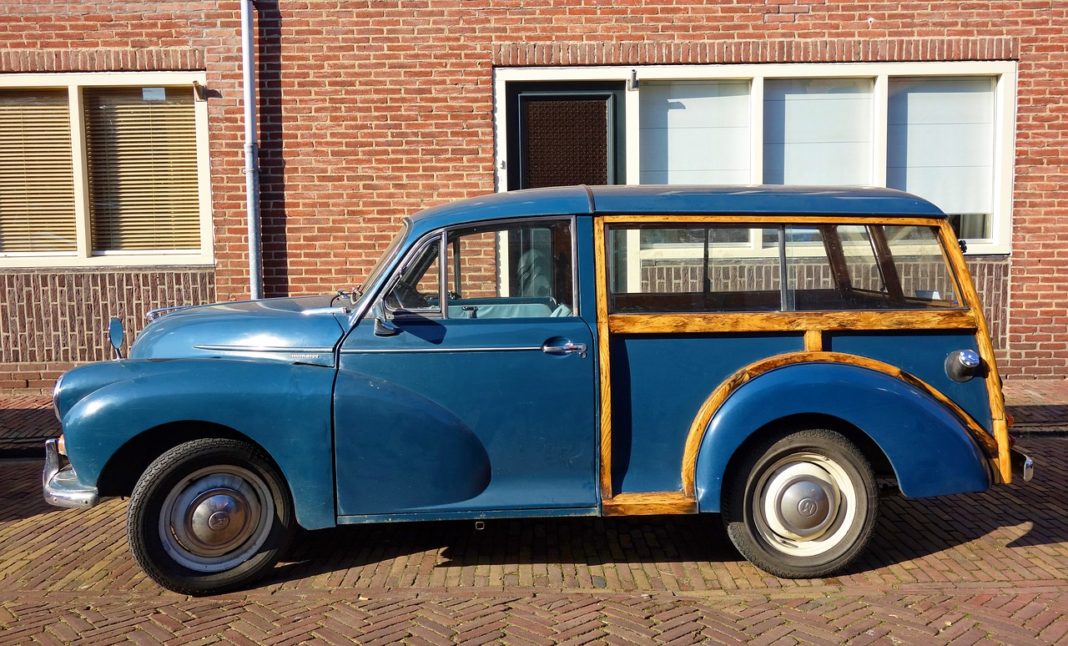 So far in this series, we’ve covered the sporty Chevy Camaro from the USA and the chi-chi, hipster-friendly (but eminently practical) Piaggio Ape from Italy, so it’s about time we turned our attention to a British vehicle. A humble little thing that was once sometimes the subject of derision, but that’s gone on to achieve iconic status and become a highly prized collectable: the Morris Minor Traveller.

Debuting in 1953, the Traveller was the estate version of the Morris Minor, which had launched five years previously. Originally named the Mosquito (the name was changed at the last minute by Morris Motors’ owner Lord Nuffield), the Minor was designed by a junior engineer named Alec Issigonis, the aim being to produce a practical, compact vehicle that was affordable, but one that “the average man would take pleasure in owning, rather than feeling of it as something he’d been sentenced to.”

The Morris Minor could, in fact, be considered Britain’s answer to the Volkswagen Beetle or the Fiat 500 Topolino. First shown at the Earl’s Court Motor Show on 1 October 1948, it had a 917cc Morris engine and was available in several different configurations – two-door and four-door, saloon and convertible. But it wasn’t until 1953, following the merger of the Nuffield Organisation with Austin Motor Company to form the British Motor Corporation that the more efficient 803cc Series II model arrived, and with it the Traveller estate model.

The Traveller Has Landed

The Traveller featured an external ash wood frame for the rear body, placing it in the ‘woody’ category of estate cars so beloved of US surfers of the day, and two side-hinged rear doors. The main framework of the car was assembled at Morris’s Cowley plant, with the wooden rear manufactured in Coventry; both parts were then transferred to the MG factory at Abingdon for full assembly. The following year (1953), steel-framed commercial variants were also introduced: the Morris Quarter-Ton Van and Morris Pick-up.

Series III (with a larger, 948cc engine) and Series V (upping engine size to 1,098cc) versions would follow in 1956 and 1962, respectively, before production ceased in 1971, with a Traveller being the last-ever Morris Minor to roll off the line on 1 April that year. Over 1.6 million Morris Minors (of all varieties) were produced in total during the car’s 23-year lifespan, with some 65,000 of those exported to the US market.

There was a time, in the 1980s, when the humble Morris Minor was regarded as something of a joke – see, for instance, Morris Minor & The Majors’ Beastie Boys-parodying 1987 novelty hit ‘Stutter Rap’. But times change, and the Morris Minor’s quintessential Englishness has made it a firm favourite among collectors today. Motoringresearch.com puts it rather eloquently: “It harks back to a more innocent time, when footballers resembled Subbuteo men… a time of Nurse Gladys Emmanuel and pale blue-and-white panda cars making proper ‘nee-nah’ sounds.”

As with all vintage vehicles, prices vary considerably. Looking around a few specialist sites, the most expensive model we could find (fully restored) was on sale for £17.5K, but that’s an outlier: as a rule of thumb, depending on year, model, mileage and condition around £11-£12K would seem to be about the standard, though you can find some Travellers going for as little as £6,500, in which case you might expect to be doing a little more restoration work of your own.

If you want to take the plunge, then look very closely at the wood frame. If it needs repairing or replacing, the good news is that parts are readily available and not overly costly – but the process, while fairly straightforward, can be extremely labour-intensive. This is reflected in the higher prices for those models where it’s already been done for you.

Then again, you may feel a few months’ worth of evenings in the garage are a small price to pay to own such an iconic piece of British motoring history! And as for the father of the Traveller, Alec Issigonis? He went on to design the Mini – but that’s a story for another day…

Here are a few Travellers we’ve had the pleasure of shipping:

We hope you enjoyed our Closer Look at the Morris Minor Traveller! Keep an eye out for more on our blog or check out the rest of our interesting shipments series. And of course, if you’re shipping a car (whether it be a classic or family car) get in touch today or get a quick quote here.